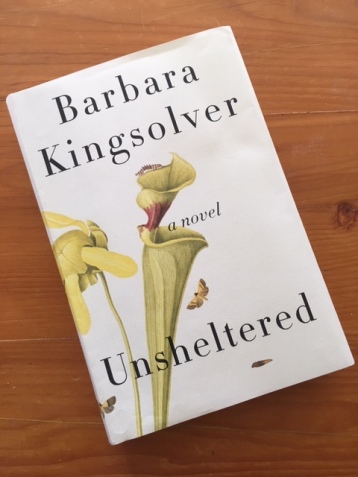 For those with curious minds, I’ve posted a picture of the novel here so no googling is necessary. That’s right—the cover is done with beautifully rendered images of plants and, well, bugs. The inside cover praises this novel as a tale of two families struggling in precarious times. This message, though accurate, doesn’t do the novel justice for the level or kind of precariousness it covers.

Based on the summary and the cover, I was dreading the historical fiction parts, and I’ll honestly say I wasn’t very excited to read it. It is a rare historical novel that interests me, and I was afraid that this one wouldn’t do Kingsolver’s work justice (I’ve read many of her other novels and loved them).

The bottom line is this: I shouldn’t have judged. The novel is very good. It functions less as a historical fiction than a scathing indictment of the current political times, whether or not this was Kingsolver’s intent. It also functions in many ways like two separate novels, yet the stories are closely related not just in physical location but because of the tumultuous and changing time period.

Willa—the protagonist in the contemporary story—clings to her idea of achieving the American Dream even as it fails her and her family. Yet I found Willa’s personal narrative to be less interesting than her daughter, Tig’s, story. For much of the novel Tig has a representatively small part, though her story is arguably the most fascinating. She disappears for years in Cuba, living with a family she adopts as her own, only to show back up on Willa’s doorstep with no explanation. She knits, grows herown veggies, and fixes cars. She might be a Freegan, if given the opportunity. It is not until the last few chapters or so that Tig’s narrative and story becomes more clear, and I was riveted by her.

In the historical sections of the novel, Thatcher makes heroic efforts to support the education of his pupils and promote true, scientific thinking, even as those in power seek to underscore his reputation and knowledge. His is an exciting underdog tale, and Mary Treat—his neighbor and friend—is an accomplished female scientist who is endlessly vibrant fascinating. She harbors spiders in her living room. Transplants ferns. Writes letters to Asa Gray and Darwin as comrades. For a woman limited by society and upbringing, Mary Treat doesn’t disappoint. From the first glimpse of her face down in her yard to the very final pages, Treat is the highlight of the historical sections.

If I say more, I’ll be dropping spoilers, so I’ll stop there. If you’re not into historical novels, give this one a go—it’s so much more than that. Afraid of the scientific parts? Never fear. This is a political underdog story that is highly relevant for our present time.

My final words: while initially I thought the political points might be better served in essay form, at the conclusion of the novel it makes sense to include them in story form as their pointedness will reach a broader audience.

One thought on “Book Review: Unsheltered, by Barbara Kingsolver”